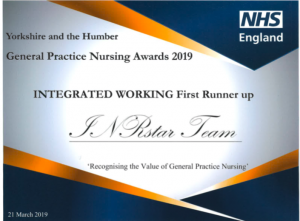 A team of Haxby Group York nurses and Health Care Assistants (HCAs) have been recognised for being part of a new warfarin monitoring service.

Patients prescribed with warfarin now benefit from the surgery-based service, known as INRStar, which monitors their anticoagulation therapy.

The INR Star team which runs the Haxby Group service in York, was nominated for the 2019 General Practice Nurse Awards in the Integrated Working category. The team came as First runners-up with Haxby Group’s Philippa Norman, nurse manager, and Lorraine Rankin, Senior HCA, receiving the award on behalf of the team.

Dr Patel-Campbell, clinical lead for the service said: “The warfarin monitoring service has been a huge success due to the input from the whole clinical and non-clinical team.

“The nursing team has worked closely with a variety of other healthcare professionals and administrative roles, to deliver a safe and effective service that has improved the care patients receive.”