World Suicide Prevention Day – what it means to me

Managing Partner John McEvoy shares a personal account of how suicide has affected him and why it’s so important to be aware of the signs:

In and around the usual busy tasks we complete, in the midst of the pandemic and at the start of one of the most complex and largest flu vaccination campaigns we have ever launched it may seem strange to lift our focus on to a topic that retains such an air of the “taboo” about it in society.  Masked in misery, hurt and shame everyone knows that it happens, but no one believes that it will affect them or their loved ones or colleagues, perhaps until it does.

I am lucky in that no one that I have been really close to has ever taken their own life.   However as a veteran I am very aware that in 2018 it was described as a silent epidemic amongst ex members of the forces by former head of the Armed Forces Lord Dannet[i] when research in that year revealed that an ex serviceperson had taken their own lives every 6 days in Scotland alone[ii].    I am also very well into mid-life, some would say almost emerging out the other side!   With suicide rated as the biggest killer of men under the age of 45 in the Western world, accounting for 75% of suicides in the UK in 2015[iii]. In both categories I appear to have “beaten the clock” stealing a phrase from a famous Herefordshire based Regiment.

However, this year of all years, despite being a middle aged male and ex forces and having many friends in the same category, suicide came closer and felt closer than it ever has before.   Three York-based businessmen took their own lives; all, on the face of it, having so much to live for and to contribute to the World.   It is that apparent lack of issues that is striking.   I’m not saying any one suicide is more tragic and heart-breaking than the next, but that in amongst the more obvious, in amongst ourselves, walk people who may be on that awful precipice, that edge of a decision from which there is no return.   Of the three, one was an immediate neighbour and one a social and business acquaintance of my partner, Penny.  The third a well-known and respected business entrepreneur who I knew of because of his support to the NHS during the pandemic but did not know personally.    I knew none of them really well, nor was I close to the two that I did know, but as I reflect on the two I did interact with I wonder what, if any, signs I missed and think how awful if must be for all their poor family and friends who must be feeling the same but ever so much more intensely.

So our focus at Haxby this week is to build awareness of suicide, individually, as a team and externally.  And to signpost help to those who need it and to those who care about them and to promote the many organisations that do such great work in this field.

If you, or anyone you know is affected by this post and wishes to know more the following links should help.   Patients and carers are always encouraged to contact us sooner rather than later, preferably via our on line system where possible, if they are concerned for themselves or others. 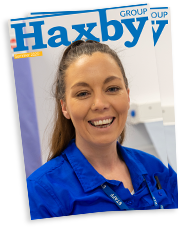